Being the baby sister of a R&B legend gives you some big shoes to fill. However, I feel like Tamar Estine Braxton does the job very well. Tamar is the youngest sister of seven Time Grammy award winning legend Toni Braxton, but deserves the room & has the RANGE to be known as more than that.

Tamar’s career began as a member of a group with her sisters “The Braxtons.” They were signed to Arista and had a moderate hit “Good Life.”

The group later became a trio with Tamar, Trina & Towanda, when they signed to Atlantic Records to release their self titled debut album. They had nice bops with “So Many Ways,” & her cover of Diana Ross’ “The Boss.”

Before we go into Tamar’s discography, can we just touch lightly on her features! Mama SINGS DOWN okay!

Favorites: If You Don’t Wanna Love Me, Can’t Nobody, Words, The Way It Should Be, Once Again, Miss Your KISS, Get Mine, Your Room, Get None, I’m Over You.

Although Tamar is not that fond of this album because of not having creative control on it, she shines on this record. Working with Jermaine Dupri, Tim & Bob, Christopher “Tricky” Stewart, Missy Elliott & others, she has some cute bops, considering the early 2000s era. Tamar wouldn’t release another album for another 13 years. 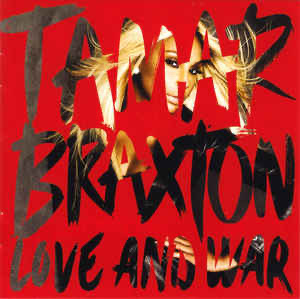 Favorites: Stay and Fight, All The Way Home, Pieces, White Candle, Sound of Love, Thank You Lord, Where It Hurts, Hot Sugar, Love and War, One on One Fun, The One.

Love and War is one of the decade’s most musical masterpieces. This album proves that the underdog always come out on top. The family reality show “Braxton Family Values” introduced a new generation to Tamar and her larger than life personality. It also showed us how vocally talented she is! You see this on the title track, All The Way Home, and many more of the incredible records on this album.

Favorites: She Can Have You, Sleigh Ride, The Chipmunk Song (Christmas Don’t Be Late,) Santa Baby, Away In A Manger/Little Drummer Boy, No Gift.

Tamar’s holiday album is an amazing affair! Honestly, she is the only artist outside of Mariah Carey that we would LOVE a Holiday album from. One of my favorite songs from Winter Loversland is “She Can Have You.” She Can Have You is a modern day “What Do The Lonely Do At Christmas by The Emotions!

Favorites: If I Don’t Have You, Catfish, Angels & Demons, Never, Broken Record, Must Be Good To You, Let Me Know, I Love You, Raise The Bar, S.O.N., Free Fallin’, Love It, Circles.

Tamar’s fourth album is a flawless affair. She deserved all of the flowers in the garden for this record. The vibe on this album is impeccable. It starts off with the reggae influenced Angels & Demons, the Right Here (Human Nature Remix) sampled Catfish, & the gospel inspired ballads Simple Things & Broken Record. The album keeps the vibe going with beautiful ballads and jumping uptempo songs.

Favorites: My Man, Blind, My Forever, How I Feel, Heart in My Hands, Hol’ Up, Run Run, Pick Me Up, Empty Boxes, The Makings Of You, Wanna Love You Boy.

Bluebird of Happiness is Tamar’s best album. Billed as Tamar’s final album, BOH shows how Tamar IS the one. I really hope this isn’t her final album, cause baby is an artist. She knows her ear for music is flawless. Her vocals are heavenly. She’s just an amazing talent.

Tamar Estine Braxton is one of the best R&B musicians EVER. She gets all of the respect in the world from me for holding down the fort. 🙌🏾