The MTV Video Music Awards was last night, and it was a memorable night! I could sit and discuss every little moment of the show, but let’s discuss what REALLY mattered.

Their performance of one of my favorite songs  from Ari’s album, “Side to Side” was awesome. Inspired by Olivia Newton John’s Physical video, the pink themed staged lit up as the self-proclaimed Queen of Rap and pop killed the stage. 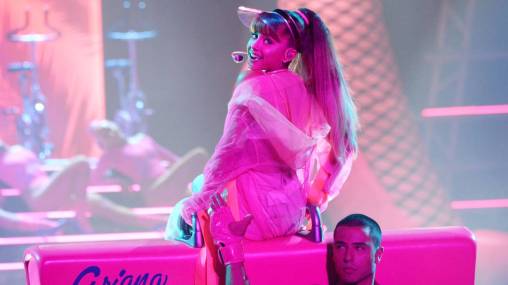 Britney’s comeback VMA performance was very interesting, to say the least. Brit performed her top-20 hit “Make Me..” and amazed viewers with her collab on the single G-Easy, making an appearance. Although, it was not what we anticipated from Spears, it is so good to see her back in the spotlight.

COME THRU QUEEN. Welcome back to the #VMA stage, @britneyspears! https://t.co/6mbHjEc4aL

Teyana was not in the building, and slayed with the world premiere of Kanye West’s “Fade” video. Similar to the Flashdance scene, this racy video showcases Teyana’s snapback game after giving birth to her daughter “Junie.” The scenes with her love Iman Shumpert is so hot, that if a sex tape of them ever leaks..give me a CALL. 🙂

Bey did not come to play with you hos, at ALL! The legendary entertainer performed songs from Lemonade for 15 minutes, and I…and the entire world were left shocked and intrigued by what was on our televisions. Bey performed Pray You Catch Me, Hold Up, Sorry, Don’t Hurt Yourself and Formation. Simply amazing. She HIT THE CAMERA WITH HER HOT SAUCE BAT! Talk about iconic. Did I add that Formation won Video of the Year? Beyoncé never fails to outdo herself every single time. As the years go by, she steals the show and makes each new performance better than the other. Simply phenomenal.

The woman of the night opened, and closed the show. The winner of the 2016 Michael Jackson Vanguard Award, Ms. Fenty showed her appreciation for being awarded such a honor, by performing four times throughout the event. The first medley starts with her most known club songs (Don’t Stop the Music, Only Girl in the World, We Found Love & Where Have You Been).

The second medley pays tribute to her bajan roots with Rude Boy, What’s My Name and Work. It was basically a club scene, with Rihanna bringing out crowds of people to have a lituation on the stage. The third performance was Trapanna, with BBHMM, Needed Me & Pour It Up. The final medley were songs that showcase her best vocal moments: Diamonds, Stay and Love on the Brain. Rihanna did an amazing job the entire night. Rihanna received criticism for the note at the end of Needed Me, and it was very awkward and a tad bit off, don’t get me wrong…but she’s still human. She’s also a work in progress, so she gets better with time. Rihanna is still at her best so far in her career, so fasten your seatbelts girls. This is ONLY the beginning.

Rihanna’s musical soulmate (and possibly her true soulmate lol..) Drake presented Rihanna with her award, and it was the most beautiful thing I have seen on television in a while. Drake professed his love for Rihanna and stated a very factual statement: “She succeeds by doing something no one in this industry does, being herself.” This is very true. Rihanna has proven to herself and the world, that she will be cemented in the history books for her distinctive vocals, amazing visuals behind the amazing music she delivers, and being a carefree feminist..by truly being unapologetic.

To checkout other medleys from Rihanna, click on the link to this article. http://www.mtv.com/news/2924855/rihanna-2016-vma-video-vanguard-performance/