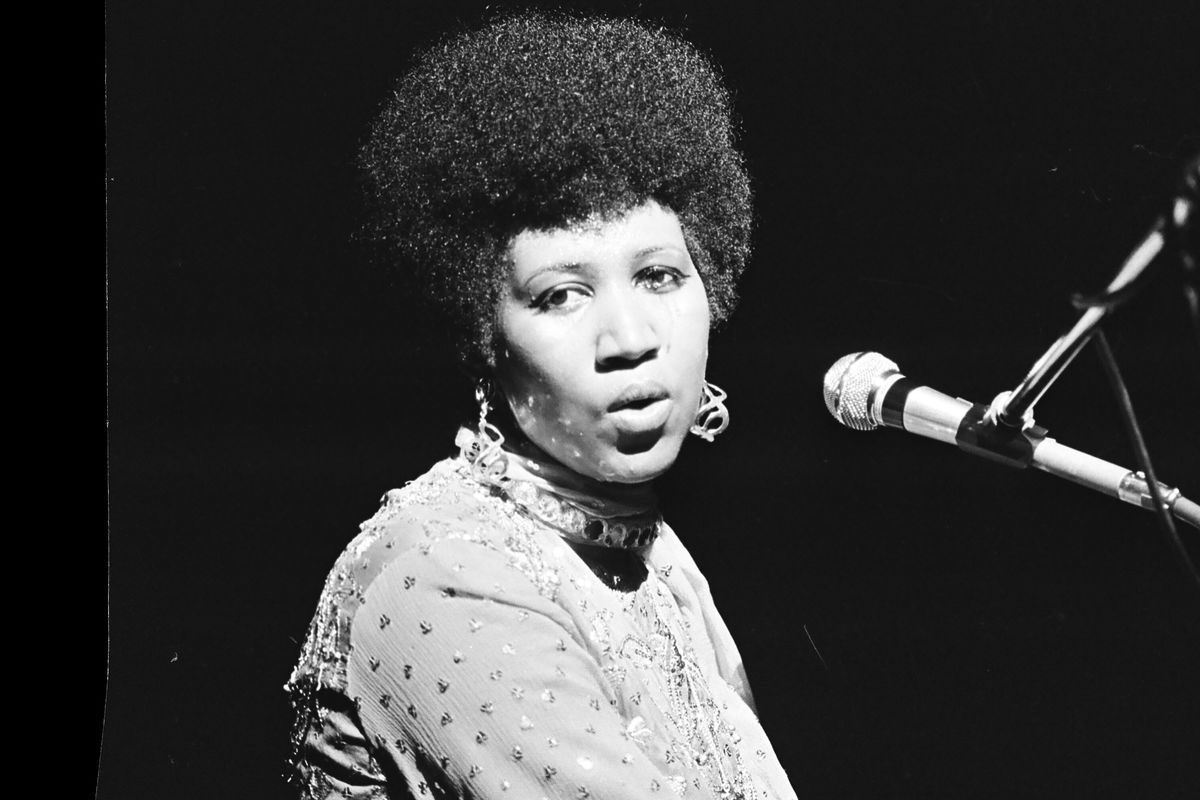 Aretha Franklin IS Black History. By 1972, Aretha Franklin was truly one of the biggest superstars in the world. The Queen of Soul’s run at the Atlantic record label was truly the chef’s kiss, giving us hit after hit from 1967 to 1972 with

Although Aretha was dubbed the “Queen of Soul” by the public, Aretha was also a Civil Rights Activist. Martin Luther King, Jr was a family friend of the Franklins for many years, among many other famous faces.

Aretha was the sound of the Civil Rights Movement, she not only housed activists, offered to bail Angela Davis out of jail, never performed for segregated audiences, she held free concerts, and helped pay for civil rights tours and campaigns…but her music was anthems for the movement, along with the feminist movement. King’s daughter Bernice highlighted the following about Aretha’s songs being synomonus with the Civil Rights Movement after her death:

We have lost another legend from the civil rights era. From the time she was a teenager, Ms. Franklin has been singing freedom songs in support of my father and others in the struggle for civil rights. As a daughter of the movement, she not only used her voice to entertain but to uplift and inspire generations through songs that have become anthems such as “Respect” and “Bridge over Troubled Water.”

What makes Aretha stand out from other musicians is her deep roots in the world of Gospel. Mahalia Jackson dubbed Aretha’s mother (Barbara Franklin)one of the finest gospel singers in the country. & of course Aretha’s Franklin was the “Million-Dollar Voice” minister and Civil Rights Activist C.L. Franklin. Anything Aretha touches turns into gold, and this album doesn’t fall short. Young, Gifted & Black is not only one of my personal favorites from Aretha, but is the literal definiton of Aretha. One might consider this album to be one of her magnum opuses, and rightfully so.

Aretha was young, gifted and Black. That alone is why she’s so damn iconic and appreciated by generations. The 12 songs on Young, Gifted & Black celebrates Black excellence in the most elequent way possible: the Aretha way if you will. With themes of Black empowerment, Young, Gifted and Black is truly ahead of its time, and is definitely one of the best albums released in the 70s.

Ladies and Gentlemen, I present to you: Aretha Franklin’s Young, Gifted and Black.

Originally recorded by Scottish singer Lulu, Oh Me Oh My (I’m A Fool For You Baby) opens up the album and is a beautiful rendition of the record. Produced by the same producers of the original record (Jerry Wexler, Tom Dowd & Arif Martin,) the lyrics of the song speak to how much in love the singer is with her man, that she feels like a fool. The song was a top 10 hit for Aretha on the Billboard R&B charts, peaking at number nine.

Day Dreaming is one of my favorite Aretha songs hands down. Written solely by Aretha, Day Dreaming is such a perfect song. Everything about it is magical: from the legendary Donny Hathaway playing the electric piano on the song, the influences of psychedelic soul was evident all across the song and it literally gives you a dream like feel. From a lyrical perspective, the song is about dreaming of the perfect man who the singer can just run away with, and love on forever. Rumors circulated that the song was about Dennis Edwards, who was a member of The Temptations and a love interest of Aretha during those days.

Day Dreaming became Aretha’s twelfth number one single on. the R&B charts, topping the chart for two weeks. Also, the record sold over one million copies alone. The song has been sampled, covered and interpolated by so many artists, I can’t possibly name them all. Just know that this is an Aretha CLASSIC!

Rock Steady is a SONG okay!!! It’s crazy that 50 years later, you can turn Rock Steady on and EVERYBODY will get on the dance floor and get down! The funk influenced song is a feel good record about grooving to the record.

I believe an upbeat record is needed on an Aretha album because one thing about her, is that microphone is ON and it is ALWAYS a guaranteed bop! The song peaked in the top ten on the pop & R&B charts at number nine and two respectively. Rock Steady has been sampled by artists like Outkast, Dr. Dre, Bobby Brown, Young Bleed, Public Enemy and many more.

You are young, gifted and black

We must begin to tell our young

There’s a world waiting for you, you

Yours is the quest that’s just begun

Aretha’s cover of this song is so special because she had this wonderful gift of taking any song to church. It didn’t matter if it was pop, soul, blues, rock or whatever. Aretha’s gospel roots were extremely important to her, and to appreciate her artistry..you have to understand that. The song showcases how powerful Aretha’s vocals were and how amazing she was at the piano. Aretha’s version has been sampled by artists like Heavy D, Faith Evans, Rapsody & Gang Starr.

All the King’s Horses

All the King’s Horses is one of Aretha’s most underrated songs, and deserves to not be! From a lyrical perspective, the song is about a love that has fallen apart so badly, that it cannot be ever put together again. Penned by Aretha herself, I believe this song was in regards to her marriage to Ted White. The song has been covered by Joss Stone.

A cover of a Dusty Springfield classic, Brand New Me has an Aretha touch on it of course. Lyrically, the song is about the singer having a newer outlook on life because of a new love.

April fools is a SONG okay!I love the production of this song, which is a cover of the Percy Faith classic.

I’ve Been Loving You Too Long

Aretha tackles another Otis Redding classic by the name of I’ve Been Loving You Too Long. I’ve grown to love this song so much, I prefer this over Respect (yeah I said it!)

First Snow in Kokomo is one of the most beautiful songs I’ve ever heard. It is illustrious, and pure perfection. The singer paints a vivid picture of her experiences in the town of Kokomo. It seems as if the singer was so amazed by the events that occurred that first snow day in the town. Leaving there, she begins to wonder what happened since that day she arrived there.

The Long and Winding Road

Aretha gives The Beatles a run for their money with her cover of their final hit single The Long and Winding Road. Our good sis definitely understood the assignment. The song was sampled by Styles P.

Didn’t I (Blow Your Mind This Time)

Aretha’s take on a Philly Soul classic Didn’t I (Blow Your Mind This Time) is truly a masterpiece. It has uptempo production and makes you enjoy this version more than The Delfonics’ version.

Holy Moses, can we live in peace?

Border Song (Holy Moses) closes out the album and I believe it is the most perfect song to do so. A cover of an Elton John original, the gospel influenced song speaks against bigotry.

Aretha Franklin’s Young, Gifted and Black was the album that Black America needed in 1972. After the turbulence of the 60s, the deaths of Medgar Evers, Malcolm X, Martin Luther King Jr, and many other civil rights heroes, the Black power movement and all, we needed music to uplift us and have our people be unapologetically Black.

Aretha was unapologetically Black and wanted the world to know that. This album is Aretha’s homage to the history of our people, our culture. It is an absolute masterpiece that will be appreciated for generations to come. -MJ